During the beginning of 2015, oil prices were decreasing due to decreases in supply. It was predicted that a supply driven decrease in oil prices would positively effect the global economy. However, in late 2015 oil prices fell due to decreased demand. Simulations have suggested that demand driven decreases in oil prices negatively effect the global economy. For example, it is estimated that a 10% supply driven fall in oil prices increase world GDP by 0.1% to 0.2%. On the other hand, a 10% demand driven fall in oil prices decrease world GDP by more than 0.2%. Simulations also suggest that the impact of both of these forces in one year would cancel each other out and result in nearly a zero percentage effect on GDP.

While world GDP may not be positively effected by demand driven decreases in oil prices, these lower oil prices do benefit oil importing states, such as the US. However, the benefit has been small and has not outweighed the negatives that are brought onto the world economy. These negatives include oil exporting states experiencing significant declines in GDP growth and currency depreciation. These problems faced by oil exporting states cause spill over effects that impact trading partners and global economic activity [1].

When viewed from a macro perspective, the current decrease in the price of oil is not good. A demand driven decrease in oil prices means that the economies of oil producing states are not growing as quickly. As a result, the world economy suffers. The following charts provide further information about oil exporting states, GDP growth, and oil prices. 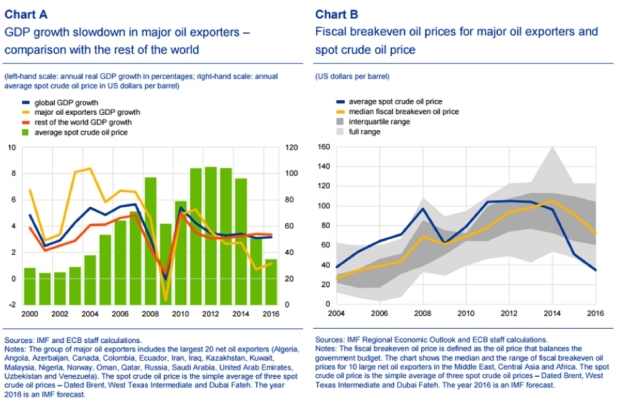